Why Society is Very Vulnerable to Fraud

White-collar crime is more brutal than violent crime. The actions of one or a few corrupt public officials and corrupt businessmen can affect the livelihoods of thousands, even millions of people. Fraudsters use a combination of persuasion and deceit to execute their crimes. Unfortunately, most people are unaware of how easy it is for fraudsters prey on their behavioral and cognitive vulnerabilities. Furthermore, the amount of prosecutions of white-collar criminals recommended by the FBI has steadily declined over the last 20 years. The government devotes far more resources to battling street crime than white-collar crime. The current framework involving, compliance, audits, and law enforcement does little to protect investors from fraud.

The Three Elements of Fraud

Fraud involves three elements: Perpetrators, enablers, and victims. All too often, people focus on the acts of the perpetrators and the exploitation of the victims. However, they ignore the crucial role of enablers in the execution of a fraud. Enablers can be the media, auditors, investment bankers, sell-side research, and others. They help the perpetrators of fraud gain implied credibility which helps fraudsters win the trust of their potential victims. Often, fraudsters use enablers as proxies to sell their message to potential victims or to quash adverse publicity. In matters of controversy, it’s more credible for fraudsters to use their enablers as proxies to defend them rather than fraudsters trying to defend themselves.

White-Collar criminals use a combination of persuasion and deceit to achieve their objectives. Fraudsters prey on the psychological and cognitive vulnerabilities of their victims using the following techniques:

White-collar criminals will always have the initiative to commit their crimes. Your ethics, morality, and good nature limit your behavior, but fraudsters have no such constraints on their behavior. The ethical foundation of our society is based on trust and legal basis of our society is based on the presumption of innocence. The inclination to trust and the presumption of innocence gives the fraudster the initial benefit of any doubt while they are free to plan and execute their crimes. Therefore, trusting and decent law abiding human beings are easier prey for fraudsters.

It’s common knowledge that effective internal controls, oversight, and checks-and-balances reduce the opportunity for fraud. However, people tend to ignore the fact that their trust, ethics, and good nature limit their behavior and create a fertile opportunity for white-collar criminals to seize the initiative and execute their crimes. Fraudsters are unfettered by society’s moral constraints on behavior.

Trust is a hazard that will destroy your future livelihood. While you initially give a fraudster the benefit of the doubt, they will attempt to solidify their trustworthiness before you follow up to verify their claims. The fraudster hopes that you trust them enough to never verify their claims. However, if you later seek to verify their claims, your skepticism may be substantially diminished by your increased comfort level with them. In other words, you will accept the fraudster’s deceptive answers as factual, even if you have some doubts.

A common mistake made by victims of fraud is called “unexamined acceptance.” Claims received from any source should not be taken for granted as being truthful and accurate without any critical analysis, investigation, and verification. Therefore, learn to exercise professional paranoia. Do not trust. Just verify.

Apologies are irrelevant. While contrition and forgiveness are admirable traits, apologies do not change the past or undo the harm caused by fraudsters. Apologies tend to make the victims feel a small measure of comfort and make fraudsters, as a minimum, appear remorseful. However, apologies should not be relied on to predict future behavior. People should be ultimately judged by their actions, not by their “well meaning” words or claimed “good” intentions.

According to the Association of Certified Fraud Examiners (ACFE) 2016 Report to the Nations on Occupational Fraud and Abuse, “Occupational frauds can be classified into three primary categories: asset misappropriations, corruption and financial statement fraud.” Approximately 10.7% of fraud perpetrators had been previously charged with a crime or had criminal records. Did Bernie Madoff, Ken Lay (Enron), Bernie Ebbers (Worldcom), or Dennis Kozlowski (Tyco) have criminal records? The answer is no. Therefore, it is difficult for law enforcement and professionals to profile the white-collar criminals among us.

Most Fraud is Discovered from Tips

The ACFE 2016 report found that, “tips are consistently and overwhelmingly the most common method by which frauds are detected.” Specifically, the study states that 39.1% of occupational frauds are initially detected from tips and 5.6% of such frauds are found by accident. Therefore, 44.7% of occupational frauds are found by tip or accident. Only 16.5% of frauds were detected by internal audits, 13.4% by management review, and 3.8% of frauds by external audits. Unfortunately, our society must primarily rely on the actions of whistleblowers to inform us about most frauds.

Who are the Whistleblowers?

Whistleblowers can provide useful information. Most whistleblowers have an ax to grind and are looking to promote their particular personal agendas. They may have known about the crime during the execution of it, but did not report it until later. A whistleblower’s credibility should be judged on the basis of actionable verifiable information they provide, not what they say.

Many investors blindly rely on the integrity of audits to protect them against fraud. Unfortunately, audits give investors a false sense of security. Traditional financial statement audits of public and private companies are not designed to find fraud. What accounting firms call an “audit” of financial reports is really a compliance review designed to find unintentional material errors in financial reports by examining a limited sample of transactions. In other words, traditional financial statement audits are essentially spell-checkers that are designed to catch the accounting equivalent of innocent typos without verifying the integrity of the underlying content.

Despite the built-in limitations of audits, the major accounting firms do a poor job conforming to professional standards and rules for carrying them out. From 2012 to 2015, the Public Company Accounting Oversight Board (PCAOB) inspected various audits conducted by the seven largest accounting firms and reported serious deficiencies in 21% to 77% of them during various periods: 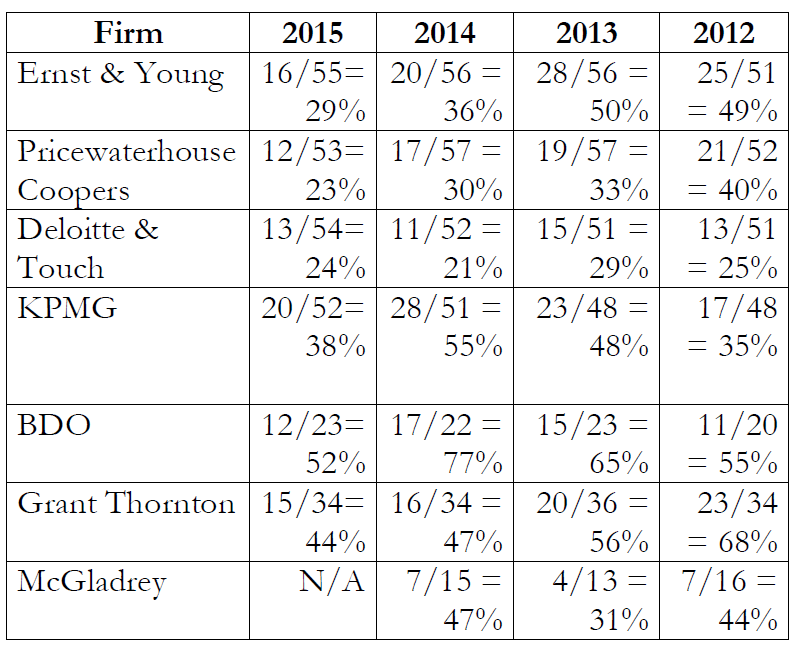 From 1993 to 2013, the amount of prosecutions of white-collar criminals recommended by the FBI has steadily declined, according to data obtained by Transactional Records Access Clearinghouse (TRAC) under the Freedom of Information Act from the Department of Justice. See the charts below provided by TRAC: 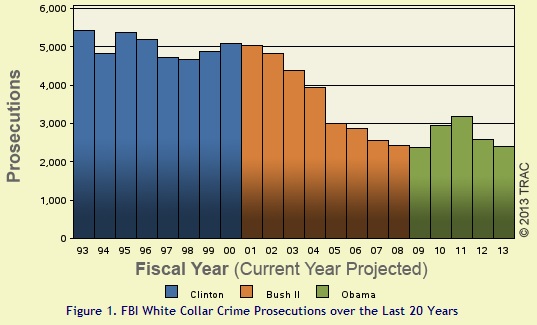